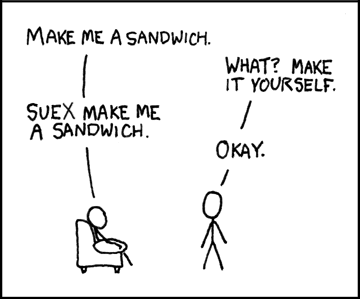 The last few weeks have been a bit crazy.

I found myself re-implementing gosu because it lacked features I needed: sick of sudoers NOPASSWD?.

Then, Even when I was done, I felt something was missing. runas, the tool I wrote, was half-way into becoming a sudo replacement and it bugged me I stopped mid way.

I looked around the web and found an amazing project called doas that is basically runas on steroids.

doas is a utility that is aimed to replace sudo for most ordinary use cases.
Ted Unagst’s, an OpenBSD developer, explained why He originally wrote it in his blog post: doas - dedicated openbsd application subexecutor.

The gist is that sudo is hard to configure and does a lot more then the standard user needs. doas was created in order to replace sudo for regular folks like me and you.
Moreover, sudo lacks ‘blacklist’ behaviour which is extremely useful at times.

doas is relatively easy to configure, and an absolute joy compared to sudo. It’s also powerful enough for most daily use-cases.
IMO, the permit / deny concept of doas is so powerful that it’s enough to make the switch.

The problem was that doas was written for OpenBSD.
I’m not running OpenBSD, so I looked around for a port.

All ports I found were half baked and poorly written.

Then I looked at the original source code, and decided I’m not going to port it.

Why? because it’s written in C, and I really don’t want to maintain C code.
Furthermore, the original code base lacked feature I introduced in runas which I really loved.

Instead, I decided to start this project. A complete re-implementation of doas.

This is my first attempt at writing a production quality, open source project from scratch.

I’m not there yet, but I’m determined on pushing this project into the main repositories of both ubuntu and fedora. More work has to be done in order to get there. for instance: Adding system tests & Getting the code audited.

Feel free to reach out if you want to contribute!

To achieve these goals, the following design decisions were made:

You can find pre-compiled .deb and .rpm packages in the project’s GitHub Releases Page.

You can also build from source. more information found at odedlaz/suex.

Changes compared to the original

doas doesn’t check the owners & permissions of the binary and configuration file.
sudo checks those, but only warns the user.

Furthermore, only full paths of commands are allowed in the configuration file.
The idea is that privileged users (i.e: members of the wheel group) need to explicitly set the rule instead of depending on the running user’s path.

The edit option is similar to visudo, it creates a copy of the configuration and updates the real configuration only when the copy is valid.

Non-privileged users are not allowed to edit the configuration.

suex allows to show logging information to privileged users. That information shows which rules are being loaded & how they are processed.

Non-privileged users are not allowed to turn on verbose mode.

suex allows the user to dump the permissions it loaded to screen.
group permissions and command globs are expanded into individual rules as well.

privileged users see the permissions of all users instead of only their own.

Ted Unagst’s wrote a great blog post called doas mastery. Because the project has complete feature parity with the OpenBSD version, the mentioned post should be a good starting point.

Never the less, there are some powerful enhancments in this release that deserve special attention.

The first rule denies odedlaz of running dnf as root with any arguments that start with autoremove, update & upgrade and have other arguments as well.

The second rule allows odedlaz to run dnf as root only with autoremove, update, upgrade and no other arguments.

These protect odedlaz from from accidentally running dnf autoremove -y or dnf upgrade -y, even if He’s a privileged user (a member of the wheel group).

On the other hand, it allows odedlaz to run these commands without a password (nopass) if they are executed without any trailing arguments.

The above rule protects odedlaz from accidentally running rm -rf / and the like.

The above rule allows odedlaz to run any executable found at /home/odedlaz/Development/suex/tools with any arguments, as root without requiring a password.